A clerk, a pharmacist, a drawer, a TV producer, an old man sick with cancer and two housewives. Who belongs to cannabis clubs in Uruguay?

– I used to grod weed even when it was illegal. But people where stealing it from me. Once I caught my two neighbors at shearing of some leaves. But they didn’t know what to do with it anyway, so I rolled them a joined.

– One of them called me disappointed and said: I dragged twice and nothing happened. So I told her: Keep on smoking, neighbor. If you feel bad, just call me!

Pablo runs a grow shop in the center of Montevideo. On the shop’s display there are T-shirts made of Indian hemp (cannabis), a few different fertilizers a number of varieties of seeds: auto flowering, regular, medical. You can easily get lost in this menu.

Three years ago, when Uruguay legally allowed to grow marihuana, the idea became famous worldwide. Politicians decided that adult citizens can have up to six flowering plant at once. The law applies only to Uruguayans so foreigners won’t even get a taste of it. However, some of them don’t give up. When we are at Pablo’s store we see a couple of Brazilians. They approach Pablo and ask:

– You know, I mean a kind of „present” you can smoke – precises the Brazilian. He leaves the shop uncomforted. 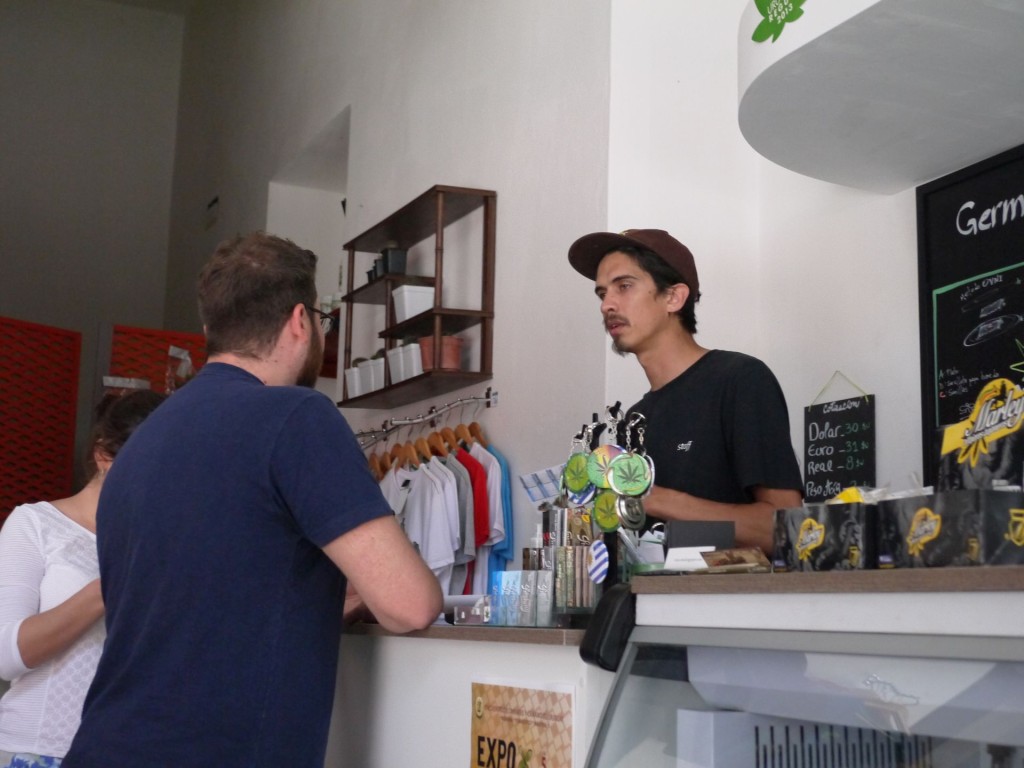 It happens to Pablo a couple of times a day. And all because Uruguayan’s politicians agreed on not linking marihuana with tourist to avoid Uruguay from becoming another Holland. However the main argument in favor of regulation of cannabis market in Uruguay was to cut down black market and so deprive cartels from their main source of income. Making it impossible for a foreigner to legally acquire cannabis they made him buy it from “el narcotraficante” they wanted to rip off the money.

The citizens grow cannabis on a large scale. Three years ago first cannabis clubs turned up. They affiliate up to 45 members who can have up to 99 plants. The club is controlled by a special office and it pays taxes. It’s precious grow is usually hidden on a top of a skyscraper so it doesn’t tempt anyone, only its members and clerks know it’s location. This is why we can only admire fruit of Pablo’s work on pictures. There is center of Montevideo and Atlantic Ocean in the background.

Apart from running the grow shop, Pablo is also club’s gardner. He showed us list of its members: a clerk, two housewives, a pharmacist, a drawer, a TV producer. 24 people in total.

– One of the members is sick of cancer. I bring him his weed, although he according to law he should pick it up himself. A funny coincidence is that there are also six Jews in here – smiles Pablo. – Next year I am going to grow for them a variety called “kosher kush”.

* We spent a couple of weeks checking out how Uruguay handles marihuana issue three years after legalizing it. This was part one of the story, in the next ones we are going to write about a family of activists, a doctor who has used cannabis in hard drug addiction cases and many others. Stay tuned.