When your memory is lost. In the land of Alzheimer

When they reach 40, they already have problems with listing days of the week or months in order. They don’t want to know that they are sick.

When we invite Carlos to dinner, he looks down quite embarrassed. He wouldn’t have gone if not for an outgoing receptionist of this hospital – she told him to do so. Carlos is over 190 cm tall, he must weigh more than 100 kg. Today he is wearing a yellow T-shirt and a red baseball cap. He looks like a giant teddy bear or a hip-hop singer from American movie.

He has just finished his cognitive stimulation workshop. His memory has already started to vanish although in two days he will turn only 43.  On this workshop he was given a task: list months and alter them with numbers: January – one, February – two, etc. He couldn’t remember what month went after April.

– September? – Nancy, his friend from class, was trying to help.

Most of the students don’t know that they have just begun to develop Alzheimer’s disease. For the moment, they think that their short term memory simply has gotten worse. Their professor, Claramonica, the wife of neurobiologist Francisco Lopera, is very delicate to them. She plays around and make a lot of jokes. As do the participants too.

– So little of them decide to join us. They are even afraid to think they might be ill. We can’t force them – she says. She also runs classes for teenagers and kids who take care of their relatives sick of Alzheimer’s. – A 14-year-old boy inspired me to organize those classes. He came for a workshop for adult caretakers and all the time he took notes on how to talk with the ill, how to turn them around in bed or feed them. I asked him: “Why have you come?”, he answered: “My mum is so busy with my uncle. I wanted to help her” – Claramonica tells us. 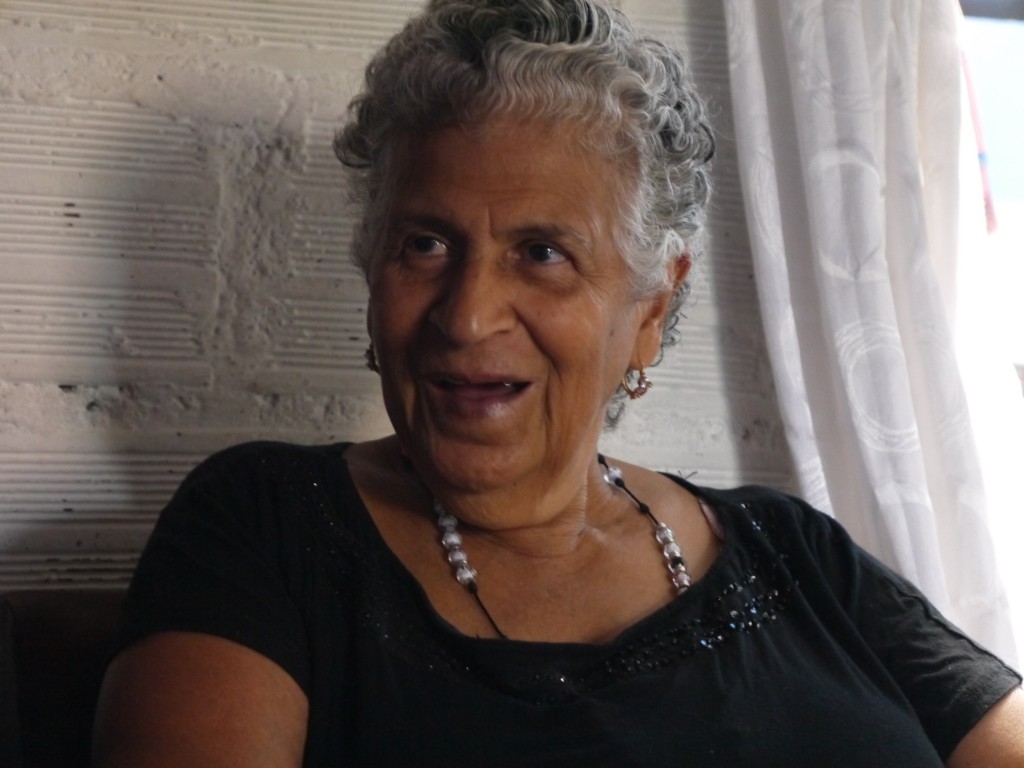 After the class we go for a dinner with Carlos and his mother Marta. She is a very positive and full of energy 70-year-old. She goes to the gym three times a week, once a week she is at artistic workshop for caretakers and she also sells local street food. She gives us a pie with guyava right away. She is friends with everyone. – The doctors tell me I am like an oak. Nothing can destroy me – she laughs.

Marta has eight children, four of them suffer from Alzheimer. It happens quite often in the families which inherit a broken chromosome number 14 – for them, the chance of inheriting the disease is 50%. Marta’s daughter can’t get up from her bed anymore. Carlos still works at the construction site, Ivan and John aren’t conscious about their illness.

– In the mountains of Antioquia, there are 25 families, around 5 thousand people, who inherit Alzheimer’s. We examine them and determine whether they carry the defective chromosome or not. We never inform them if they are going to get sick – says us professor Francisco Lopera, world famous neurobiologist who discovered this huge group of affected people. –Let’s say that between 100 people we have examined, me have made one mistake. It doesn’t affect our study’s results but this mistake is a tragedy for a human being. And we don’t have any cure to offer yet, so what’s the point of increasing one’s anxiety? – he explains.

In the mountains of Antioquia, Colombia, there are several cities where entire families suffer from Alzheimer’s disease: Angostura, Yarumal, among many others.

When we wait for a waiter to bring us food in a restaurant, Carlos talks with us as any other Colombian would talk. “Oh, you are from Poland like the Pope, we loved him so much, we still remember him. Are you a couple? You should get married!” It’s hard to believe that he is sick already.

Patients affected by genetic Alzheimer’s start to develop the symptoms much sooner than those who get sick sporadically. Amyloid beta, a protein which in case of wrong dispersion can cause the disease, starts to cumulate in their brains at the age of 28. They experience first problems with cognitive tasks when they are 35 years old, although they can’t notice them yet (but tests can). Another step leads them to problems with short term memory. “Where have I put this? Oh, I was supposed to buy milk.” Still, there is nothing to worry about – these kind of problems happen to many sane but simply distracted people. But after they turn 40, their memory falls apart at full speed. At the age of 47 or 48 they reach the state of dementia which means they require full time care.