Mennonites. Living out of time

In Bolivia we move back to the XVI century. Where Mennonites live without TVs, radios and cellular phones.

We wake up just in time to accompany Lebbon’s family in cow milking. Isaac, his wife Sara, his 16-year-old son Isaac with his younger son Frank and Eva, the youngest of 14 siblings, tumble off the wooden house. Women are wearing flowery dresses cut in the exact same way. Men sit down on small chairs next to their animals in shirts and dark dungarees called “overalls” here. This very same outfit is worn in a dairy barn as well as for a wedding reception.

Birds have been twittering since 5 o’clock to announce the beginning of the day. The house and barn, so red and white, so neat, lit by the rising sun, resemble Scandinavian villages more than any of Bolivian messy households we have seen along the way. 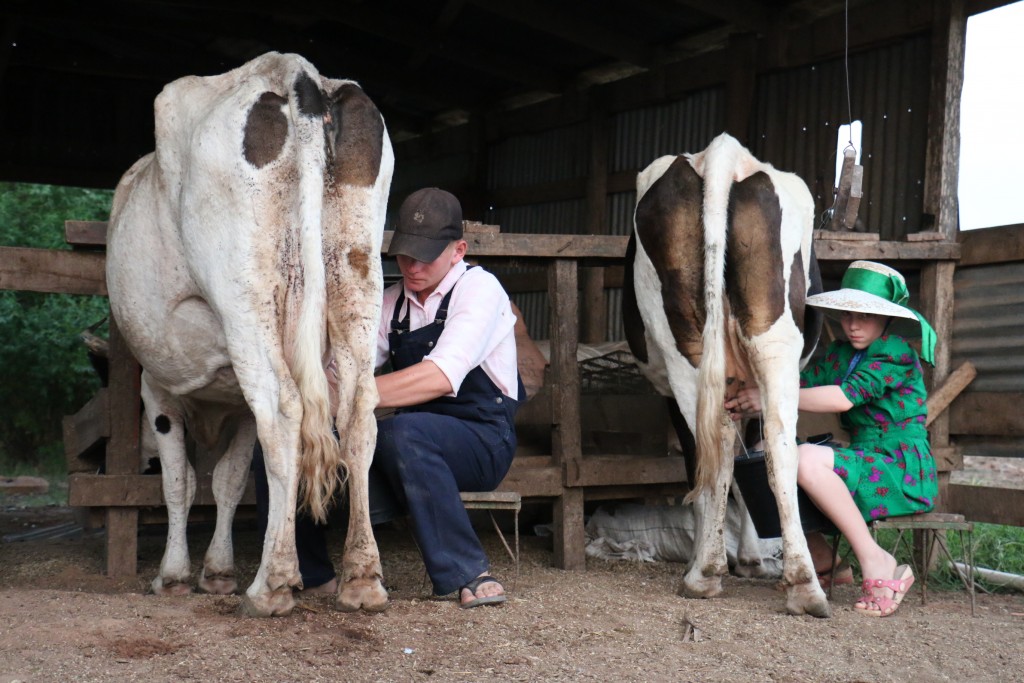 We are in Santa Rita, a Mennonite colony. Mennonites are Christians, protestants who belong to Anabaptist community. They emerged in sixteenth century Holland together with more recognisable and well-known Amish community. They came to Bolivia in the late 50., mostly from Mexico, Paraguay and Canada. They were looking for the place which would let them  live isolated from the world according to their strict religious principles. Nowadays in Bolivia there are around 70 thousand members of Mennonite community.

Mennonites, as well as Amish, live outside modernity. They earn their living growing plants and breeding animals since they are mature to do it. They speak Plautdietsch, an old German dialect of East Low German group with some Dutch admixture. Our host, Isaac, speaks Spanish fluently but he uses only basic vocabulary. His wife Sara understands just a few words but can’t pronounce any of them, nor can her children. 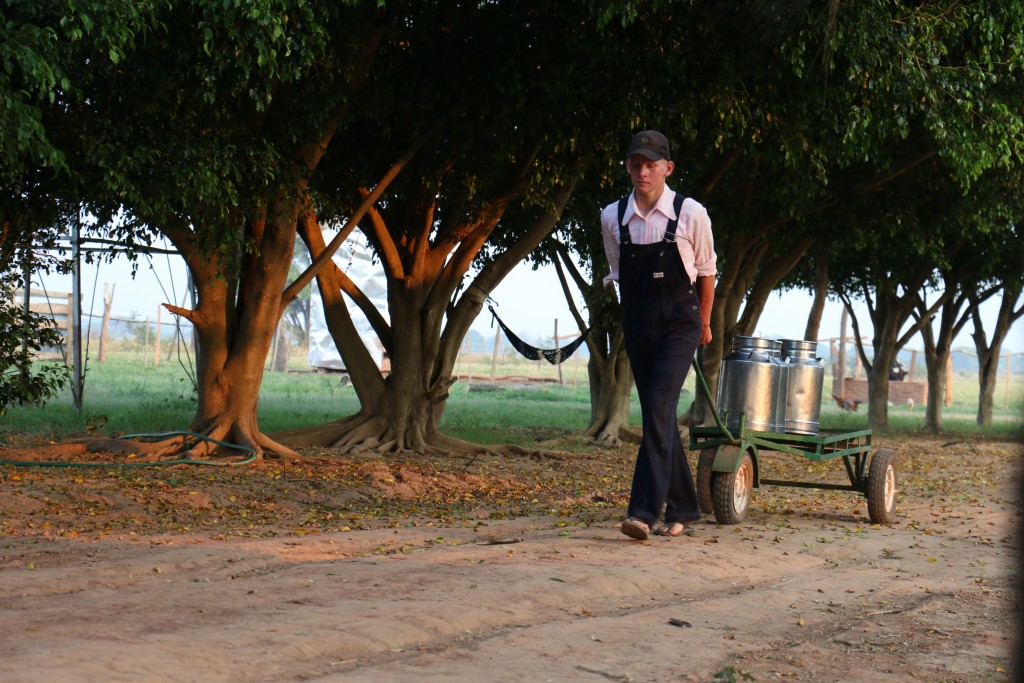 Mennonites are not allowed to use electricity: radio, television, cellular phones, all those devil’s devices which are banned by pastors called “ministros”. Nevertheless, the first thing young Isaac asks Simon when he keeps him company to a nearby town (all dirty roads look just the same for us), is if he has a radio.

– Can you please turn it on? – he asks shyly. When Simon does it, a smile full of childlike joy appears on Isaac’s face. Then, encouraged by his first success, he asks him for a cigarette. Tobacco, alcohol and all sorts of entertainment like listening to the music, dancing or playing football, are forbidden too.

Children study in one class all together, girls go to school only till they are 12 years old, boys – 14.

– What do they study? – we ask Isaac the older one, our host.

– To read, write, count and sing psalms – he lists.

– Has any of you children wanted to be anyone else than a farmer? – we inquire. 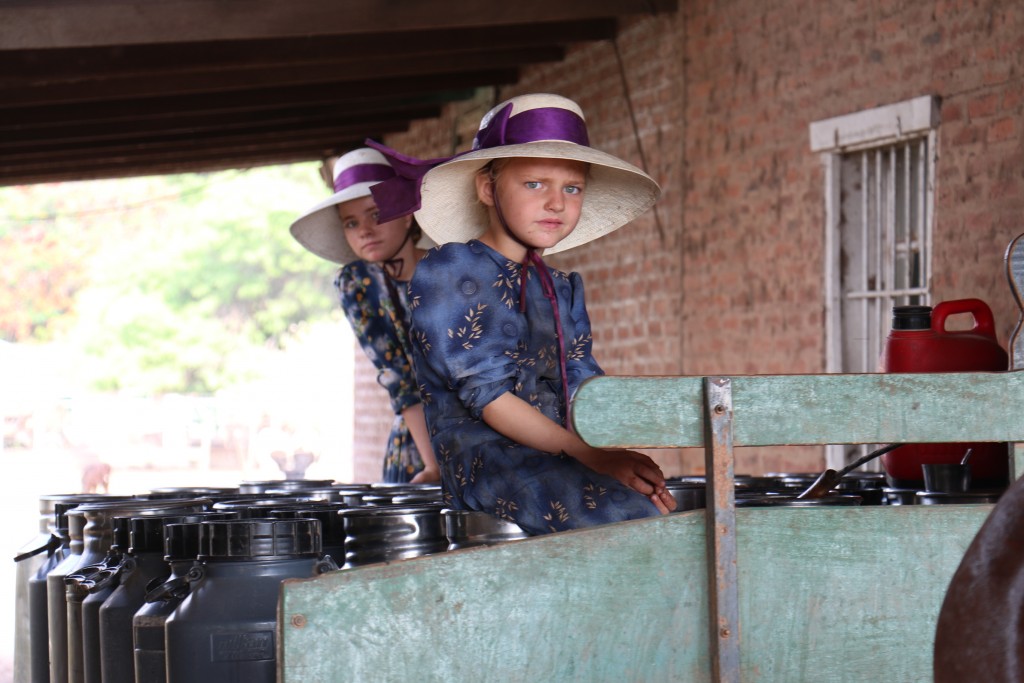 Isaac has 40 bulls, 13 cows, 2 pigs, 4 thousand chickens which he breeds five times a year. He feeds them up to six weeks and then sells them. He also keeps 3 horses for transportation. He puts them on one of his two chaises called “carroza” every time he goes shopping or sets for his weekly journey to Santa Cruz, the biggest city in Bolivia, where he buys products unavailable in the local store. He leaves his “carroza” in the nearby town Cotoca where he hops on a minibus.

Yesterday evening the Lebbons invited us for dinner. Their kitchen is snow-white, very modest and so clean you could perform a surgery on their kitchen table. Their old-style cupboard has a metal counter. After the dinner Sara will put two bowls on it, one with suds and one with clean water for rinsing plates and fingers. 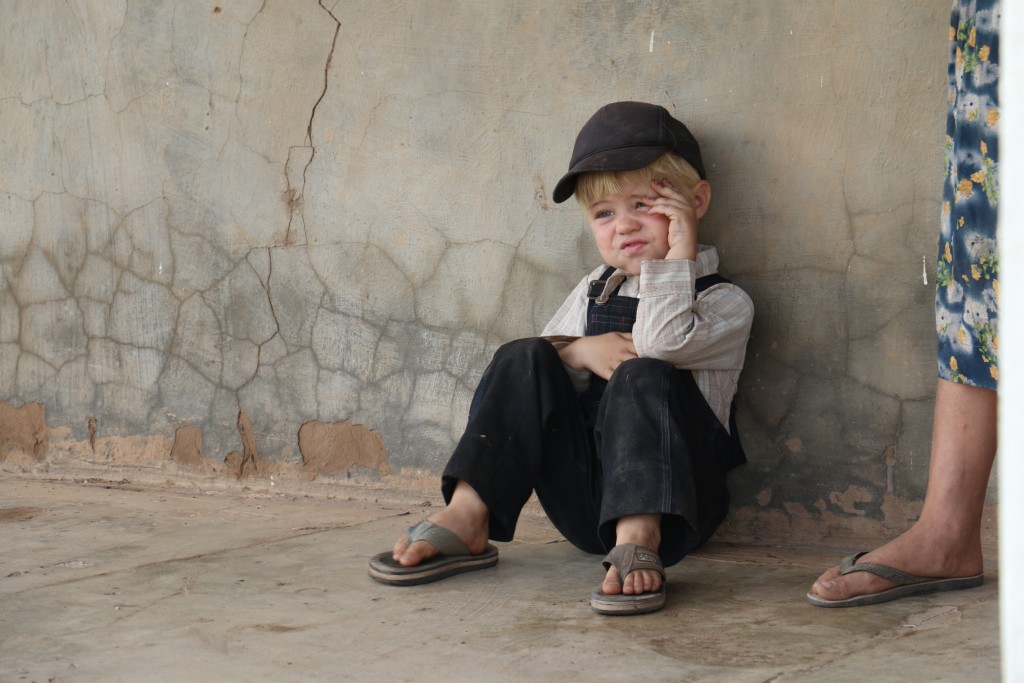 We sit along white-painted long table. We can hear gentle hissing of a gas lamp which stands in the corner. There are flowery curtains made by Sara and Eva on their 30-year-old, black Singer sewing machine. They sew their one style dresses on it too (every girl, from 1 to 80 years old wears the same outfit! Only the pattern makes the difference).

We eat beef cutlets and delicious rice with it. None of the Lebbons sits with us at the table. They sit behind, just near the entrance, which makes us turn our heads between our plates and our hosts 180 degrees all the time. Another son of Isaac and Sara, Peter, comes by with his wife Miriam. They must have been intrigued by an uncommon view of a car parked at their father’s courtyard.

Peter asks us if we have seen recent TV news.

– Unfortunately, we haven’t. Why do you ask?

He saddens. – I just wanted to know when it would finally rain.