In Santo Daime church. Ayahuasca is a communion

We’ve heard so many stories about magic ayahuasca on our way! We haven’t expected to try it. And even less – in a church!

We are excited. And a bit scared too.

In a Peruvian jungle, they warned us: – You really need to find a good shaman. Ayahuasca will take you to another dimension. It’s up to him if you will ever come back.

Maya, an English teacher from Peru, giggled when she told us: – My friend after drinking ayahuasca gave a blow job to a shaman. Twice!

In Bolivia, Bartek, a Polish traveler, said to us: – I have heard many stories about miraculous healings, there was eve one girl who was partially paralyzed and started to walk after drinking ayahuasca.

Marco, a photographer from the south of Brazil, told us: – It’s amazing that you are going to try it! But be prepared: you are going to confront a part of you which you wished you have never seen.

Right now we are in the north-east of Brazil, not too far from Fortaleza, but at the same time – in the middle of nowhere. There is just sand and bush all over the place. And total silence too. In three hours, the ceremony of concentracao (concentration) will start in Santo Daime church. Those who worship Santo Daime during every ceremony consume brownish cha (tea), ayahuasca, which here is called Daime (in Portugese: “give me”). Daime is a broth made of plants which only grow in the Amazon and its indigenous inhabitants have prepared it for thousands of years. It contains DMT, the strongest natural psychedelic compound which appears in our body in small quantities when we meditate, dream and, most probably, die. High concentration of DMT guarantees hallucinations which last for a couple of hours, sometimes they are very pleasant, other times – just the opposite. 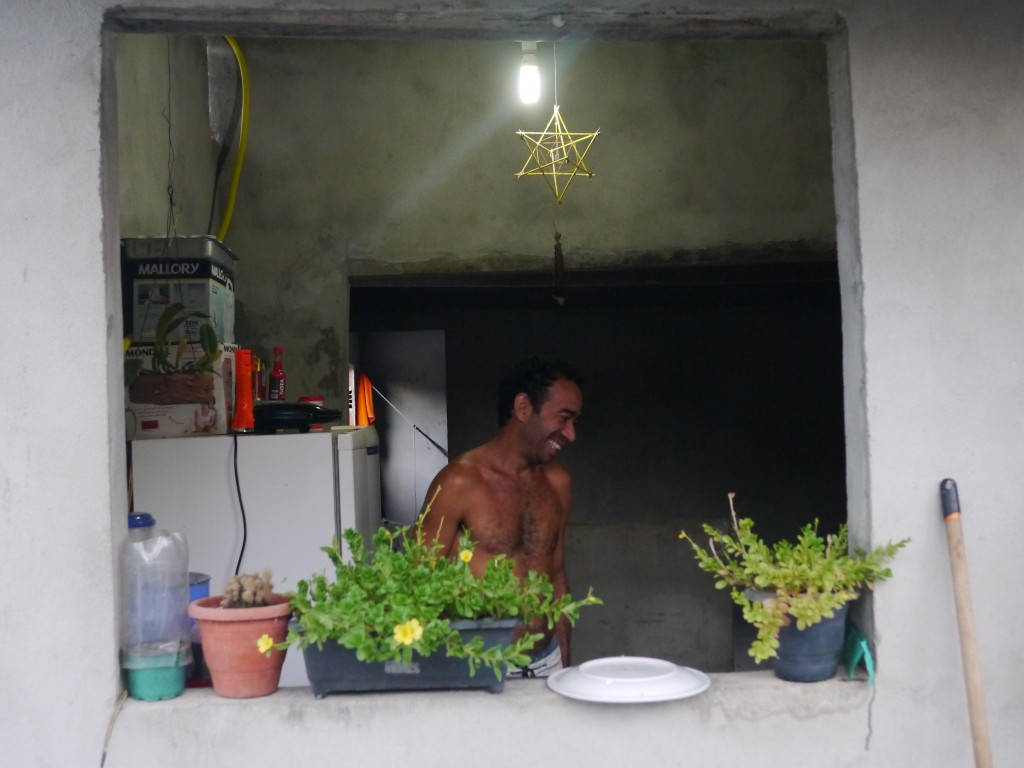 The Santo Daime Church was founded by master Raimundo Irineu Serra, a man born to African parents in the south of Brazil. To form his doctrine, he mixed shamanic, Christian and African believes. Before you enter a church which is painted in white, you pass a cross with two beams, there is also sun, moon and a star above the entrance. The building is hexagonal, the chairs are organized: women sit on the left, men – on the right.

We visit houses scattered around this special church. They are hidden in bush. We explore it together with a Polish guy, Wojtek, and his girlfriend Helena. He has belonged to the church for two years now and not a long time ago he bought himself a piece of land in its neighborhood.

– Here there will be a round living room, and over there, one of the bedrooms – he points to a drawing made on a sandy land. He will build the house with his neighbors’ help and it will be the very first house he has ever built. One of his future helpers is an Argentinian specialist of adobe technique whose dog has just given birth to eight puppies and who celebrates his birthday today and therefore he is totally drunk (which we understand). Another helper will be Alladin who has been building his own house for nine years now. Before moving here he was a popular hairdresser in Fortaleza. Now he grows his own plants: Santa Maria (marihuana), San Pedro (hallucinogenic cactus which contains mescaline) and other goodies. Together with Wojtek, they blow “rape” to each other’s noses now, it’s a kind of tobacco made from another Amazonian plant. 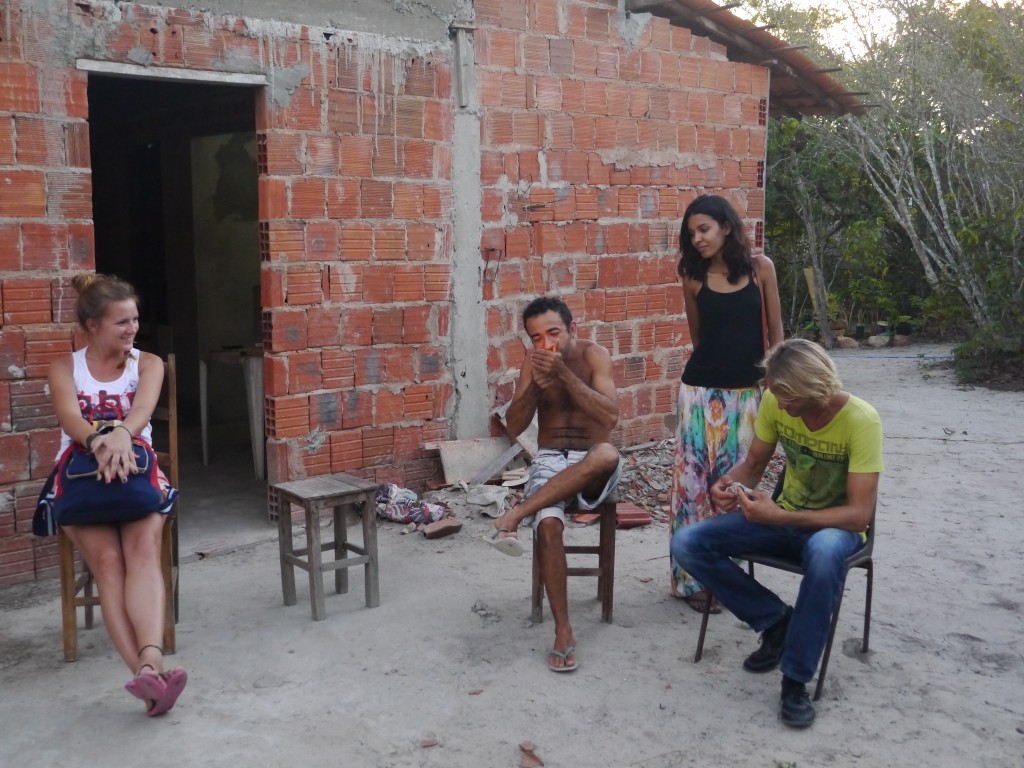 They encourage us: – Do you want to try? It only wakes you up, no trips!

Later on they “sacrifice Santa Maria”, which obviously means smoking a joint. It’s a non-obligatory extra before Santo Daime ceremony. We are a bit too stressed to join them.

– Where are you from? Poland? You have made such a long trip, it will be just great, you will see. I am even a bit jealous that it will be your first time tonight – says Alladin and smiles gently. A few other people tell us more or less the same thing.

In Alladin’s little house there is only a hammock, a mattress, a pipe and speakers. Guess what is on? Revolutionary etude by Frederic Chopin – he’s Alladin’s favorite composer. There are three Poles in the middle of Brazilian bush listening to the best Polish composer ever. How come? 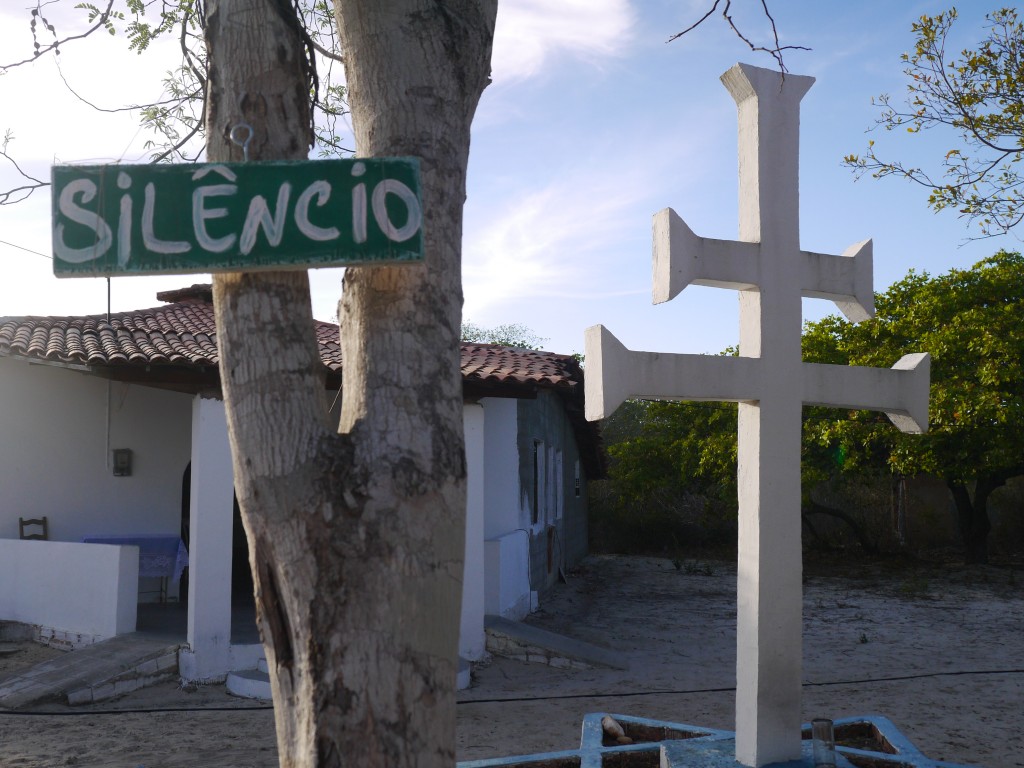 We change. Everybody needs to wear white, dark blue or green colors, others attract bad energy. Everybody looks elegant – women in their long dresses and shirts, men – in long pants or even suits. There are elderly people and kids too.

Quite surprised, we ask: – They are going to drink ayahuasca too?

– Of course! – replies Jose Erivan, the leader of this church (although he says there is no pastor nor priest here, everybody is equal). – I have four children, all of them have drunk Daime since they were little. Kids have pure souls, they never experience bad trip.

I borrow a long white skirt from his 16-year old daughter. His wife lightens up candles at the altar and in three little chapels outside the church.

Everybody whishes everybody: have a nice trip.